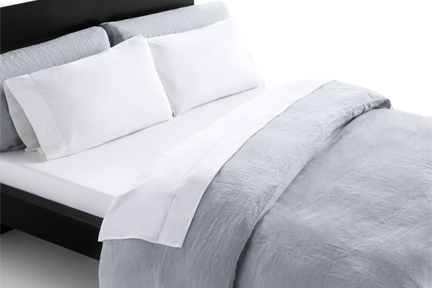 LOGAN, Utah – Upscale bedding manufacturer Malouf just announced it will release a chic line of French linen duvet cover sets to complement its award-winning French Linen Sheets. The company will show the new sets—which include a duvet cover and matching pillow shams—at the upcoming New York Home Fashions Market, widely regarded as the premier site for textile bedding trends. The French Linen duvet cover sets are made of pure linen from natural flax fibers grown by French artisans. Natural flax creates linen that is breathable, light and airy with inherent moisture management properties for a fresh sleep environment. Linen lasts many years and is designed to soften with each wash, creating an heirloom piece that gets better with time. The duvet cover sets feature natural colors and a vintage wash for a classic, stylish look. “Linen has a proven place in the world; it’s classy, timeless and trending among a growing number of style-conscious consumers,” said Sam Malouf, CEO at Malouf. “Recognizing the opportunity, we continued the tradition of award-winning design and extended it to the duvet covers and shams. We’ve had a lot of success with our French Linen sheets so we expect these to push the trendline even higher.” Outside the norm, Malouf engineered the duvet covers with eight loops, instead of just four, to ensure the duvet lays flat without bunching; a patent-pending design. Malouf’s current lineup of duvets, including the Down Blend and Down Alternative comforters, are designed to fit its duvet covers perfectly. To experience the French Linen duvet cover set and the entire Malouf collection, visit Malouf’s New York showroom at 230 Fifth Avenue Suite 1312 in downtown New York City or its new location in High Point at Market On Green, suite 204.